Our founder, Mr. S.A. White, founded our business in 1926 with a big dream and endless dedication to hard work. He started with a grocery store and a few Sinclair gas pumps, his wife “Willie” doing the books, and he eventually opened a fuel distribution center on a modest thoroughfare known as Atlanta Road.

Though much has changed in almost a century, our commitment to customer service has not. Our company is still locally owned, operated by the third-generation of the S.A. White family and focused on adapting to what our customers need, without ever sacrificing our level of attention to them.

In 1955, S.A.’s daughter, Suse Ann, and son-in-law, Wally Gresh, picked up the reins of the business, which thrived under their leadership. Mr. Gresh was instrumental in transforming the company from a commissioned agent business to a distributor business, taking ownership of and leading the company’s accounts. Operating as the first distributor for Fina in Georgia, Mr. Gresh began to deliver the fuel straight to customers. But challenged by FINA’s territorial limitations for S.A. White customers, he brought the company into the installation business and an era of rapid growth. 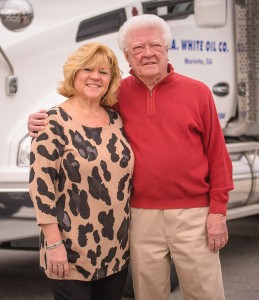 Wally, a Coast Guard veteran, knew this new version of the business had the potential to be extremely successful, but it needed greater capital investment. He bought his first tractor-trailers on credit, implemented a self-service station at the site of an abandoned gas station, and added a small convenience store that sold the necessities of the time, such as bread, milk and cigarettes. Soon his small station of seven employees began to out-perform the FINA station with its staff of 45!

At that time, Mr. Gresh was the only salesperson, and he did the work of an entire team, traveling over 80,000 miles a year locally. To his knowledge, he had the first mobile phone in Cobb County, a ship-to-shore phone that took up almost the entire trunk of his Buick Electra!

Wally’s gamble and hard work paid off. The service station business expanded quickly, and S.A. White as a company began providing heating fuel for homes. As he likes to put it, “Good timing and good luck made us grow.” But steadfast in the philosophy that bigger is not necessarily better, he kept customer service in mind with every step.

In the 1980s, Mr. Gresh strategically sold off the five convenience stores to specialize in providing fuel for commercial customers onsite and at the Atlanta Road location, a focus the company has kept every since. He was responsible for bringing Conoco into the Georgia market.

Kim Gresh, current President of S.A. White and Owner and President of its sister company, Mobilized Fuels, is the third generation to run the company, a fact of which her grandfather would be proud. She is the first female member of the Georgia Oilman’s Association and is the first woman to serve on the ConocoPhillips National Marketer Council. Ms. Gresh has paved the way for women in the industry, not just in Georgia but nationwide.

Kim grew up in the family business, learning as a child from her grandparents and parents. “Our business has grown with this community,” she says.  And her grandfather’s commitment to customer service has been a part of it every step of the way.

In a trend of consolidation among fuel providers in recent decades, S.A. White stands firm as an independent. Ms. Gresh stands firm in other ways too, making sure customers never get a recording inviting them to leave a message—there is always a live voice at the end of the line to handle fuel requests and other needs immediately. Because what’s important to you is important to us.

Today, the little road where S.A. White started has evolved into four lanes, the company delivers 80 million gallons of fuel a year, and Cobb County and the Atlanta area have exploded into a bustling metropolis, the centerpiece of a thriving region. We’ve grown our business and our family with this area, being a part of its development for the last century. And with all there is to look forward to, we love being a part of its future too.